Around this time, four years ago, I was writing an essay about the Senate Judiciary Committee hearings on Jeff Sessions’ nomination as Attorney General.  In the essay, I focused on concerns expressed by Democrats and civil rights groups concerning Sessions’ attitudes about race during his time as a US Attorney, questionable statements and actions that derailed his appointment as a federal judge in 1986.

Remember when Jeff Sessions’ alleged racism was the most shocking thing we had yet been presented with by a Trump administration?

What I did not understand at the time was that these hearings revealed the future, a pattern of gaslighting and brazen lying that would culminate in Wednesday’s assault on Congress. Yet the writing was on the wall during those hearings. Republican Senators demonstrated how they would collaborate with and normalize the topsy-turvy world of right-wing white grievances.

The allegations against Sessions were deflected by Lindsay Graham (Republican senator of South Carolina) and John Cornyn (Republican senator from Texas), who were just shocked that any white man could be treated so shabbily as to have his racist past dredged up in public.

These fellow southerners invited their Senate colleague not to answer the charges, but to testify about how painful it was to be presumed to a racist just because he was a southern, white man. No one had to say explicitly that it was Sessions who must be the real victim of racism, not the Black people who had drawn attention to it.

No one had to. 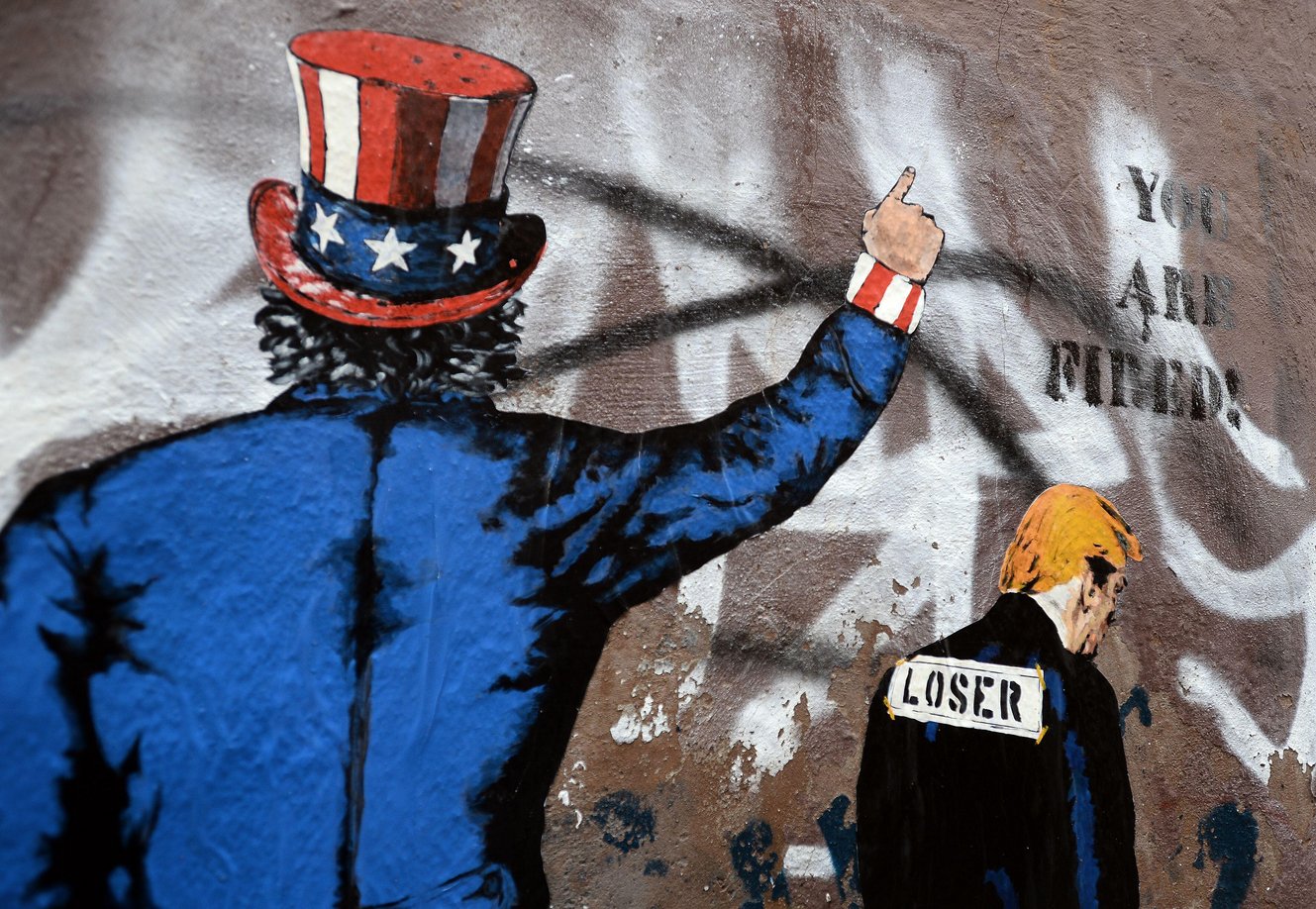 In Vicolo della Renella, in the heart of Trastevere a few steps from the American University John Cabot, street artist Harry Greb has created a mural depicting Donald Trump in the aftermath of the assault on the US Capitol in Washington. Photo by Independent Photo Agency/Alamy Live News.

In the wake of an armed mob of Trump supporters, egged on by the outgoing president, invading and looting the Capitol in an attempt to overturn Joe Biden’s 2020 victory, I am, in retrospect, shocked at how clueless we were back then.

We had to learn, over four years, how to live and function in an ongoing state of shock as the norms of governance and the idea of truth went into freefall. Yet Trump’s outrageousness distracted us from the fact that he was, in a sense, parasitical on the Republican party’s own cynicism.

This article was originally published in the Political Junkie newsletter.

We had already watched in disbelief as, almost a full year before the 2016 election, Mitch McConnell took the unprecedented step of refusing to hold hearings on the Merrick Garland Supreme Court nomination. Clinton’s loss seemed like a catastrophe, rife with sketchy practices that skirted federal campaign law, yet she – and numerous other Democratic politicians – urged us not to look at it that way, to give Trump a chance to govern.

But the world had already turned upside down. I went to work after Clinton’s concession speech to find that, sometime during the night, vandals had spray-painted swastikas all over the front of the university center at The New School, a university famous for having taken in Jewish intellectuals fleeing Hitler.

Of course, Clinton did what defeated opponents are supposed to do: concede. She offered support and good wishes to the incoming administration. Looking back on it, and knowing what we know now, it would have been as reasonable for Clinton to scream: ‘Take to the mattresses!’ Instead, she reaffirmed a keystone of American democracy: the peaceful transfer of power.

But peace ended as soon as Trump was inaugurated. The last four years have felt like a constant struggle, an ongoing war to preserve some semblance of normalcy as Donald Trump demonstrated his contempt for democracy, human decency, and the nation of suckers who were now in his charge, and fanned the flames of white supremacy that he hoped would keep him in power.

As each terrible thing happened, one following upon the other at terrifying speed, it seemed that all the conventions and precedents we had taken for granted were shattering and that there could not be any democratic norms left for Trump to wipe his ass with.

Understanding that the calamity we feared had arrived on day one was a gradual process. When Press Secretary Sean Spicer told reporters with a straight face that an unprecedented crowd had come to see Trump inaugurated, even as networks showed a picture of a half-empty mall, we were puzzled as to why anyone would tell such a stupid lie. But I now think it was part of the process of conditioning the American people to accept being gaslit.

on Trumpism and its aftershocks 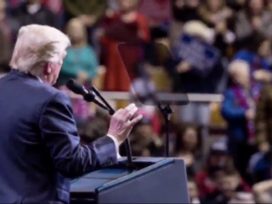 The contemporary art of lying 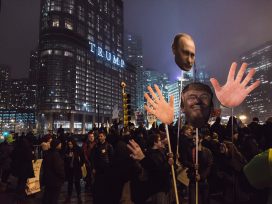 A Trumpian blip or a fundamental flaw in American democracy 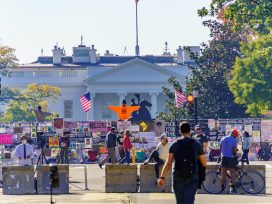 Fragments from a broken mirror 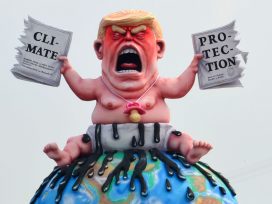 The shelf-life of democracies 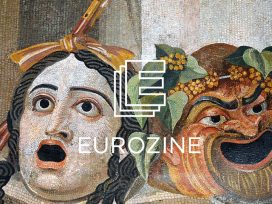 The current crop of clowns

The joker, the trickster and the prankster

We did not understand that at the time. Instead, we tried to accommodate. When political consultant Kellyanne Conway was accused of making unfactual statements, she told us with a straight face that she had presented ‘alternative facts.’ We told jokes about it. When Trump signed an executive order to stop people from mostly Muslim countries who had legal visas from coming into the country, we were shocked and frightened. And when white supremacists marched on Charlottesville, and Trump refused to condemn them, we went to a place beyond shock because it was clear that there were no limits.

The idea that Trump would somehow be overcome with the solemn duty before him and become a moral person in any way was so naive that it breaks my heart. Perhaps it was a way of defending ourselves psychologically, for as long as we could, from the catastrophe to come.

We watched Trump pack immigrant children into cages, where they sickened and wept inconsolably for their parents. We listened to Trump suggest hair-brained remedies for COVID-19 while holding huge, maskless rallies and insisting that all the public health recommendations were inane.

What happened on Wednesday was inevitable, and has resulted in at least five deaths so far, one a Capitol police officer who seems to have been beaten by the MAGA insurrectionists. There is a video that is circulating on Twitter that appears to show a post-rally tent party where Trump and his allies are partying while the rioters invade Congress: now compare it with the President’s own account of his actions.

The attempt to overturn the 2020 election with a torrent of lies and by assembling an armed, outraged and violent mob to invade Congress seems so predictable. Why haven’t we been preparing for this for years?

We are a traumatized, but finally perhaps, a wiser nation. After four years of lies and threats, Twitter, Facebook, and Instagram locked Donald Trump’s accounts in the middle of the insurrection so that he could no longer communicate with the criminals rampaging through Congress. Twitter has restored him; the others will not do so until he is out of office.

Yesterday, the question of how to remove Trump immediately was actively debated. Simon and Schuster cancelled instigator Josh Hawley’s book contract, which will force him to publish what is probably his campaign book with a right-wing, rather than a mainstream, press.

But what about the rest of them, the Republican senators and congressmen who came along for the ride, who also incited the mob by claiming that the election was stolen, something they knew not to be true? What do we do about them?

As Zachary Carter wrote in the Huffington Post, although most Republicans ‘are not torch-bearing fascists’ (is that our standard now?), practically all Republicans were willing to ride the Trump Train until a few weeks, or even days, ago. Even then, too few are raising their voices.

This horrifying attack on the government is their fault as much as it is Trump’s. As Carter writes:

We have more than four years of evidence revealing what Trump is and who is attracted to his ideas, Nobody in American politics is confused about the danger he represents to democracy. The accumulated evidence includes a murderous Charlottesville, Virginia, neo-Nazi riot in 2017, and a shoutout to a fascist street gang from the presidential debate last fall.

Senate majority leader Mitch McConnell, who did not acknowledge Joe Biden as president-elect for five weeks after the election was decided, lost his majority just hours before he took command of the Senate podium to count the Electoral College votes. Suddenly, after four years, he was concerned about democracy. ‘If this election were overturned by mere allegations from the losing side,’ McConnell lectured his colleagues, ‘our democracy would enter a death spiral. We’d never see the whole nation accept the election again.’

Was McConnell finally afraid? He should have been. The MAGA mob was already on its way, ready to tear down everything in its path, including Mitch McConnell, who they detest. As he was huddling in a bunker while the insurrectionists rampaged through the heart of government, did McConnell finally understand that Donald Trump is, and always has been political kryptonite?

Having stood by as Trump destroyed the Republican party (at whose headquarters, MAGA insurrectionists had thoughtfully left one of the several bombs that were defused that day), McConnell now had no way to restrain Josh Hawley, Ted Cruz, and the other presidential aspirants who – against his explicit directions – declared (without believing it for a minute!) that they would overturn the 2020 election and hand the presidency back to Trump.

As of yesterday, McConnell, who benefitted from the Trump Train more than anyone, controlled nothing and no one. He was a target, just like the rest of us. 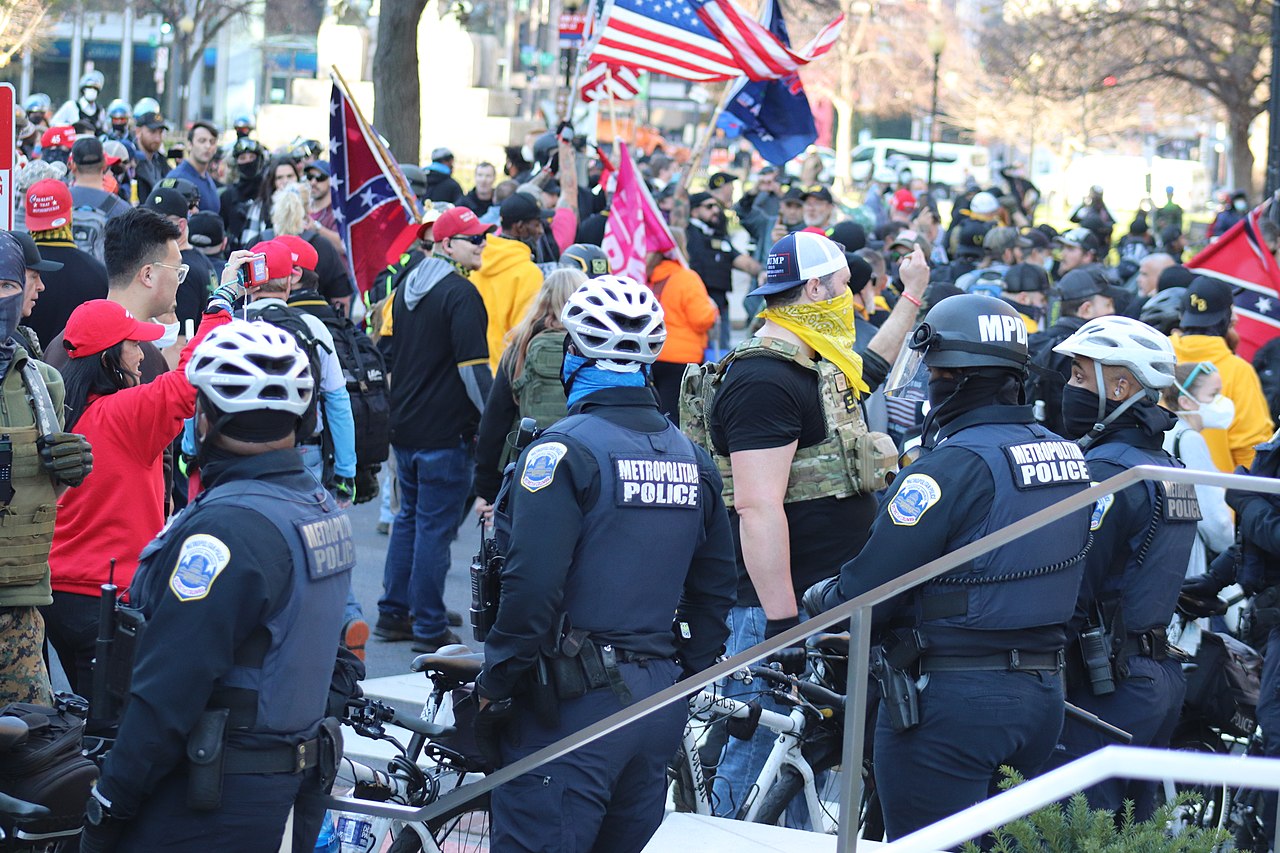 The Proud Boys march for Trump in Washington DC in December 2020. Photo by Elvert Barnes via Wikimedia Commons.

So here we are. Trump’s allies in Washington are putting as much distance as possible between themselves and a president who is now widely perceived as crazy and dangerous: transportation secretary Elaine Chao and education secretary Betsy DeVos resigned from the Cabinet yesterday, as did numerous White House functionaries. Conservative pundit Ann Coulter has thrown Trump under the bus (again). The conservative Wall Street Journal has called for Trump to resign or be impeached. USA Today published a full-page editorial that describes Donald Trump as ‘mentally incapacitated’ and ‘living in a fantasy world.’ Freshman Democrat congresswoman Cori Bush has introduced legislation to expel house members who supported Trump’s conspiracy theory with their votes.

And this is only the beginning, friends.

In twelve days, four years of not knowing what terrible thing will happen in Washington next will be over. How we will get there, no one knows. We can only be sure of one thing: that no American politician can ever again say that what makes democracy in the United States unique is our historical and lasting commitment to the peaceful transfer of power.

I hope it is the final thing Trump breaks on his way out the door. But I don’t believe it will be.

This article was originally published in the Political Junkie newsletter.